Every Norwegian boy and girl born after 1953 are familiar with Torbjørn Egner’s Klatremus and his friends in the Hakkebakkeskogen. It’s as popular today as it was fifty years ago. One of the familiar songs from this classic children’s book, is the gingerbread song – a song sung by the chief baker, Baker Rabbit [Bakemester Harepus] to his assistant so that the assistant won’t forget the recipe for gingerbread cookies. The problem is, the assistant mixes the lyrics up, and thus he adds 1 teaspoon sugar and one kilo pepper, instead of the other way around. Needless to say, the result isn’t very successful (and Baker Rabbit is forced to make a new batch).


The morale of this story is not to check the recipe properly (as the bad cookies actually come in handy to teach the mean fox a lesson), or not to trust your assistants. As a recipe the song is quite useless (none of the recipes I’ve ever seen actually have pepper in them – even though gingerbread in Norwegian is pepperkaker. If you want proof that the recipe is no good, check out this link where a chef tests both recipes. It’s in Norwegian, but you should be able to get the gist of it even if you don’t speak Norwegian). The best usage for the song, aside from being a very funny part of an altogether wonderful book, is to set the mood for proper gingerbread making [pepperkakebaking].

That is how I spent a Friday night earlier this month. My new roommate and I had decided that we wanted to build a gingerbread house – something we’ve both been doing for years, but usually not together and always at our respective parents’ houses. When I was little, we always made the same basic house each year – we used the same pattern and we decorated it with the same type of frosting and candy every year. As I grew older, however, I took more charge in the process, and the houses gradually became more advanced. We’ve made churches, trains and a fortress to name a few – when I came back from Japan we even made a pagoda. This year, however, we decided that it was time to think even further outside the box. We made the Tower Bridge in London!

It took a lot of work, a lot of dough and a lot of mulled wine [gløgg], and seeing as it is a combined bascule and suspension bridge (ours isn’t really, but it still involves four long structures made of cookie dough, supported only at each end. It felt like defying the laws of physics), it took some hidden wires to keep it from collapsing. After having glued it together with melted sugar, and decorated it (mainly with the Norwegian equivalent of Smarties – NonStops, as is tradition), it looks pretty nice. We even entered in a contest where the winner gets 10 000 kroner (but that’s never gonna happen – after having seen some of the other contributions  I am slightly more down to earth concerning our chances of winning…).

And now for something completely different. Christmas is around the corner. Finally. It’s been a stressful few weeks (as anticipated). Not only have I been working 15 hour days almost constant since the end of November; the 15 hours in question have been fairly crazy too. First I’ve spent a good part of the day at the university, fighting my way through what eventually has become an acceptably solid but hopelessly crappy draft for what will become chapter three of my thesis. When I was in the U.S. I was collecting sources for my thesis. Now I am working with them, trying to figure out what they mean, trying to identify patterns or lack thereof. It’s a whole ‘nother story, and I've been stressing max to get something written, something, before Christmas.

After having spent eight or so hours at the university, I have most days had work afterward too – in the bookshop from h*** (you know the place…). Normally it’s a nice place to work, but add the extra ingredient “Christmas” and people, like the aforementioned gingerbread recipe with extra pepper, go bananas. I don’t like being yelled at. I don’t like being told that I have to wrap presents when this means that the 20 others waiting in line will have to stretch their patience even further. I don't like people grabbing my arm to get a hold of me when they need a recommendation for a "book for someone who doesn't read" (well, then don't give them a book. It's that easy!). Basically, I have done nothing else than work, write my thesis, eat and sleep for weeks. I expected to post another “Conversations in bookshops” blog, but even though I have the stories, I just don’t have the energy when I get home at 11 pm every night.

That is quite enough complaining for today. After all, it’s over now. I've sent the chapter draft to my supervisor. Today is my last day at work before Christmas, and next term I will work next to nothing (which will be tough financially, but it needs to be done if I want my thesis to be finished on time). Tonight or tomorrow morning I leave Oslo to celebrate Christmas with my family in Kongsvinger. And Norway is looking like Norway should at this time of year – Winder Wonderland. It’s been either snowing or freezing for a week or so, so now it’s stuck even downtown Oslo. I expect making snowmen with my nephews in a few days.

I think it’s time for me to declare that this blog will take a Christmas break (it feels like I deserve it, even though I know I haven’t been keeping up the blogging in the midst of all the mania). I will be back in 2010 (or maybe sooner, but I don’t expect so. I intend to spend my time off with my family and friends, plus I have a ton of books I’d like to read).


Merry Christmas, and a Peaceful New Year – or Happy Holidays to those who celebrate otherwise! 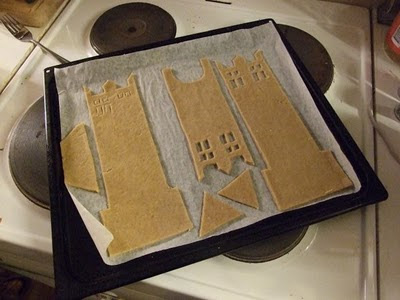 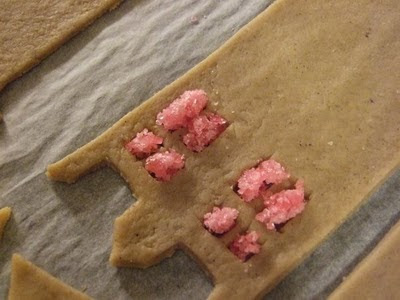 Smashed hard candy [drops] in the window openings will make glass after baking. Or so the theory goes. It sort of worked, but they tended to either break or get very sticky. But also very cool! 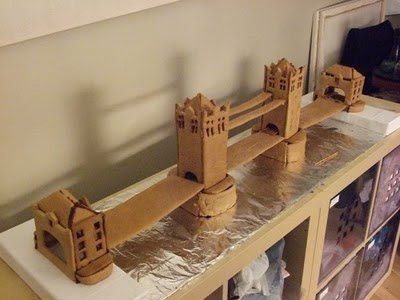 Nudist Tower (yes, Tami, this is for you) 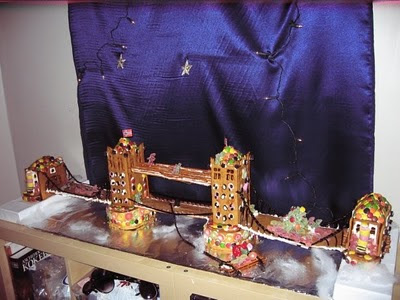 The image might not reveal it entirely, but on the right side of the bridge there has been a jelly man [seimann] massacre seeing as we wanted a Christmas tree and the only thing we had to make it from were the green jelly men... The red ones are happily dancing around the "tree"... 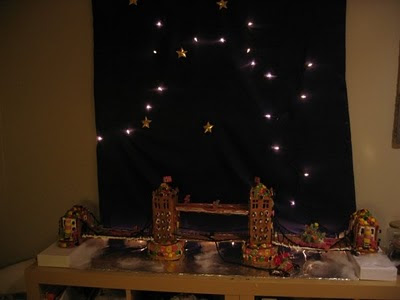 Giraffed by Cruella Collett at 13:18

That is so cool Mari! Very good work. I've never made a gingerbread house *shock, horror* but one day I will (not this year...)

My recipe for Pfeffernüsse has black pepper in it. But only in small amounts (either 1/4 or 1/8 of a teaspoon) in conjunction with lots of other spices... ;)

It's beautiful! And I love the story you told us about. We just have the Gingerbread Man here and I'm not sure about the moral of that tale--don't talk to foxes?

Enjoy your break, your reading, and your family.

Mari, your name is misspelled in the entry on that site AND you're not in the photo there ;))

::applauds and wants some now::

The only gingerbread house I ever made came in a kit. Everything was premade. I think this is absolutely amazing! Great Job.

BrioNI! - I think I lied a little bit when I said I've never seen a recipe with pepper in it. I have. But like yours, they only have it in VERY small amounts. One kilo pepper (as the video shows) is A LOT of pepper... (it turned out like sand, pretty much...)

Elizabeth - I guess talking to foxes often is a bad thing in children's tales... Huh...

Joris - yes, I know. I've no idea why, though, since my friend is more than capable of spelling (but perhaps not typing) my name... But I took the picture :)
How fun that you showed your dad and brother the pictures - my gingerbread bridge has received international recognition!

Mark - no, no, no one gets any until we break it all apart sometime in January (by when it's pretty yucky, so no one really wants any... Strange customs in this country...)

Marjorie - it's actually not as difficult as it looks (and it's a lot of fun - go for it!)

It only makes sense to show them; both are Scandinavia-mad (though frankly mostly Sweden -- in fact, Timo is just IKEA mad, to the point he can walk through the showroom with his eyes closed. (He can. We tried.)), and I in fact helped them make some themselves two weeks back, though that was just figures. We're up for a building next though ;)